"At the intersection of Ecology, Phisolophy and Ethics: It is only through a combination of both the best information about the working world and rich expressions of value that we will arrive at an understanding of how we and our children ought to live in the world, with dignity and grace, now and for all time."

That narrow green band: the last of Amazonia 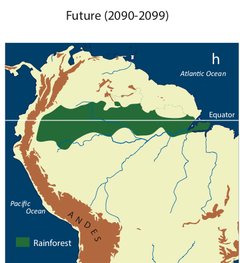 Expected distribution of the Amazon basin by end of the 21st century. Link

A few years ago when we worked on our review on the effects of warming and drought in Amazonian forests it was heart-breaking to look at one of the resulting figures and see that just in a few decades the only remaining part of the largest rainforest could be that narrow green band in the Future map for 2090-2099 (right map). To keep some hope I liked to think that the on-the-ground evidence and models available were still not very accurate and therefore too pessimistic. However, looking at the area affected by the recent fires that devoured the Amazon basin (left map) it seems that the speed at which its forests are disappearing is actually on track with what the empirical and theoretical studies forecasted under an economic “business as usual scenario”.

Shortly after in an empirical analysis of forest communities we found out that forests in the western Amazon have been quite stable during almost two decades in contrast to the considerable changes that were evidenced in the east, which supported again the expected endurance of the western Amazon (the widest part of that green-band in the ‘Future map for 2090-2099’). The predictions are thus demonstrating their reliability and in accordance with them we can expect that areas like Yasuní National Park (Ecuador) might be able to survive at least until the end of the century (and perhaps even beyond that) if we maintain their forest cover by protecting them from further development. Several areas within that narrow green-band are home to several indigenous groups that are currently in voluntary isolation, which makes their preservation even more fundamental. That green-band would be the only corridor available for Amazonian plants and animals sustenance and migration in just a few decades from now.